The journey begins from Spring Plaza, a peaceful village on the north of Elysium, one day Quinn is woken up by an inhabitant and asked to help them deal with the Sorceress Somnia who has suddenly invaded the Plaza for mysterious reasons...

Quinn is one of the Four Heroes, individuals set to watch over the four towns at the corners of Elysium. Each town is named after a season and have a key monument that characterises them; From Spring Plaza's immense Clocktower, to the impressive Battle Arena in Winter Arena as well as the Gong in Summer Crevasse and the Radio Tower in Autumn City.

The journey will task Quinn with searching for four ancient Runes before Somnia and her Nightcrawlers get to them first, allowing her to cast a powerful spell that would put the entirety of the world into an eternal slumber.

Along the way Quinn will tag along with the other three Heroes and explore the many fantastical and dreamlike areas of the world like Dawning Islands, Midnight Mines, Noon Nests and Twilight Tundra, each explorable area hosting a dungeon to conquer and more pieces of the mystery to piece togheter...

With their trusty whip, Quinn can do all sorts of actions to traverse the environment and solve puzzles! Lasso enemies and throw them, carry things, push, pull, grab and drag, whip and break. Study your environment carefully and use your moveset accordingly to proceed!

The 2022 Demo is what most closely represents the game, from its visuals to controls and music, we aim to make Dormiveglia as polished as possible.

This Demo includes the entirety of Chapter 0, which is the introductory chapter of the game.

If you wish to support us, consider joining our Patreon!
https://www.patreon.com/dormiveglia

THE DEMO IS AVAILABLE ON STEAM AS WELL!
https://store.steampowered.com/app/2026720

Hello Darkonius Mavakar, my name is Bruno, I make indie game gameplays on YouTube, here in Brazil, I want to congratulate you for the great project, the game has a lot of potential.

Hi,
Im running your game via Wine and it crashes on startup for me:

Here's the output from Wine:

second time in a row where the flying worm thing in the clock tower (which you have to throw at the wall) hits me and I get pushed and stuckm in the damn wall! >:-(

just finished the demo, nice game.
only the above mentioned bug annoyed me since upon closing the game, you restart from the very beginning (and not the checkpoint, as you do upon death).

Which version of the demo did you play?

I was in all cases standing against the left wall since the flying worm thing spawns to the right of me, so I always tried and very often failed to whip that thing when it descends.

and in both cases, standing against the left wall, the thing basically hit me fromm the bottom right, giving me some upwards momentum from the hit.
and most likely shoving me into that rectangular wall aray above, since I at least couldnt se my character anymore.

thats at least what msot likely happened, character was jsut gfone, no input showed him anymore, so I guess hes in the wall or somewhere.

We'll try to investigate on the issue further, we cannot seem to replicate it, but we'll still keep an eye on it!

The visuals are amazing. Unfortunately I didn't get too far, that first grab ring in the Clocktower is just, one ring too far. Got to grab it once out of over 50 tries, & then when I tried again cause I wanted to practice... no grab. Very odd. 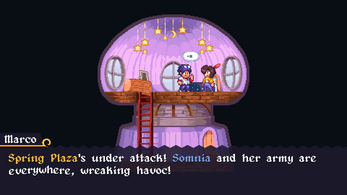 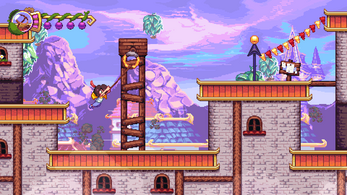 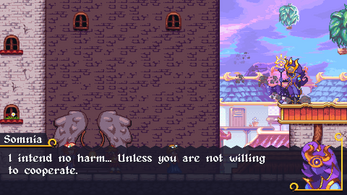 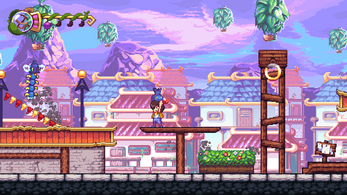 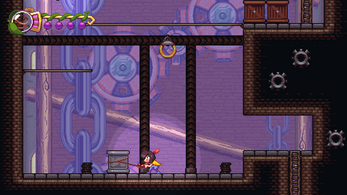